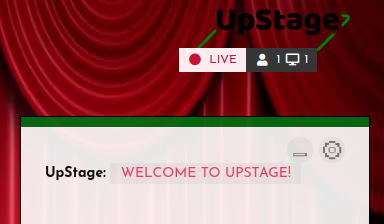 You can easily see who’s currently on a live stage using the Player-Audience Counter located at the top right corner of the stage.

The person icon indicates players (logged in), and the computer screen icon indicates audience – the number of connected devices that aren’t logged in as players. Note that often there can be more than one person watching a performance from a single device, and sometimes performances are screened to gathered audiences in a proximal space. In these situations, the audience counter only shows the number of connected devices, not the actual number of people who may be watching. 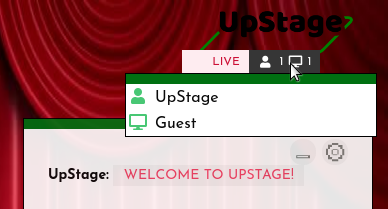 When you hover the cursor over the counter, a drop-down list appears, showing the names of all players and audience members who have chosen to enter a nickname.

Audience members who haven’t entered a nickname will appear as Guest. If there’s more than one Guest, they’ll show as Guest1, Guest2 and so on.

The drop-down list will disappear when you move your cursor away.

Note that you can also see the Player-Audience Counter in the Backstage list of stages, in the Statistics column, and on the Foyer page in the top right-hand corner of stage images, when the stage is live.