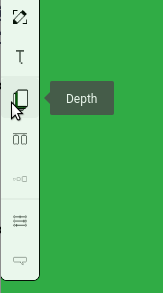 Open the Depth tool by clicking on the icon in the left-hand tool bar. An overlay appears at the top of the stage with thumbnails of all of the graphic media items currently on the stage (avatars, props and streams).

Hover your cursor over the avatar, prop or stream that you want to operate. A green frame appears around that item on the stage, and it floats in front of the media items that it is behind, but only you are seeing it in front. You can then adjust the size, move it, access the right-click context menu and perform other operations using the green frame.

Note that if it’s an avatar, you must also be holding it (the red icon will show above it) in order to access the right-click menu, light bulb and delete button.

The order of media items can be rearranged by dragging and dropping the thumbnails in the Depth tool overlay. The icon at the left-hand end of the bar is at the back, and the icon at the right-hand end of the bar is at the front, or on top. Drag an item from left to right to bring it forward, or from right to left to move it behind other media items on the stage.

Remove avatars and props from the stage

The Depth tool provides another way to remove avatars and props from the stage: drag a thumbnail away from the bar, and you’ll be asked if you want to remove this media item from the stage.

But take care, as it is possible to accidentally remove an avatar that’s held by another player. There’s a prompt that will ask you if you really want to do this.